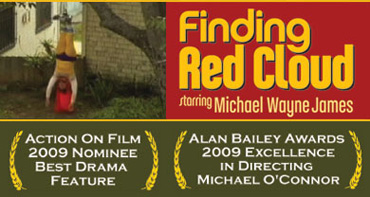 The heart and soul of the movie “Finding Red Cloud” is Michael Wayne James. He’s different compared to the other two main characters, as he is the only character who just wants to make a good impression on someone. The guy wants to be a hero. He sits in a superhero costume just begging to save the day one of these days. He’s as desperate to save someone as Lechner’s character is for loving someone.

It would be hard not to overlook this guy’s performance while considering the most convincing performance of 2008, and it is only the start.
– Exerpt from Film Arcade review

Congratulations! The movie “Finding Red Cloud” has won the Alan Bailey 2009 Awards for Excellence in Directing.