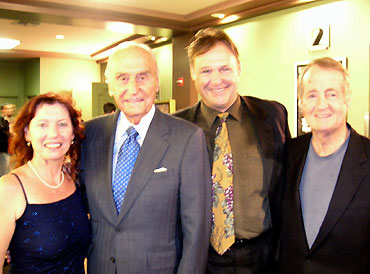 The legendary A.C. Lyles of Paramount Pictures attended the screening of “The Devil Wears Spurs” at the New York International Independent Film Festival. What a thrill it was for the Bravado Production Team to be accompanied by such an Icon. A.C. Lyles has a career spanning over 75 years and is well known for producing such popular westerns as: “Rawhide”, “Buckskin”, “Johnny Reno”, and the list goes on and on. Most recently consulting for “Deadwood”!

Starring in the film was Nick Sowell as Max McCoy who is also the Executive Producer of this fine piece. Along with Nick was the famous Bill McKinney, whom is also known for his role on “Outlaw Josie Wales” and seven other Clint Eastwood Films. New talent, Charlton Thorp, the Writer and Director moved the film with his character as Cal McCoy. Finally, Michael Wayne James as Sheriff Von Morley got an awesome review by A.C. Lyles. “Michael Wayne James is a great actor. The overall production was great!”

A big compliment goes out to David Box, composer and Shawn Grice, director of photography for their unbridled talents in giving the film impact and flow. They together brought the characters alive!

All in all this was a successful evening validated by the presence and acceptance of A.C. Lyles, the Master of the Western Drama. You will see this team of talent along with other famous names soon again in the film “Elves”, t o be filmed in year 2008. From left to right Suzanne James, A.C. Lyles, Michael Wayne James and Jim Brewer.